Mirelurk kings are highly agile and well-armored foes that are almost always encountered nearby a mirelurk queen. Though usually alone, it is not uncommon to find more than one king at a mirelurk den. They will run up and swipe, as well as perform a powerful sonic blast attack from range, with a very high chance to stun. They also have a high HP pool and damage output.

Mirelurk kings do not resemble the crablike mirelurks, instead appearing to be heavily mutated frogs based on sounds they make and the webbing between their fingers and toes. They are very fast and can easily kill a low level player character in seconds.

Mirelurk kings can be found at the wendigo cave.

Mirelurk kings are potential candidates for taming. If found alone in a random encounter, the player character can send the tamed creature to their C.A.M.P. for defense. 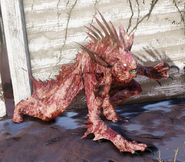