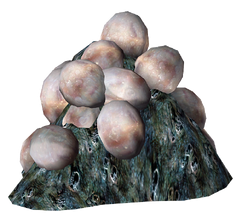 A variant of mirelurk eggs

Mirelurk eggs or mirelurk egg clutches are a type of container in Fallout 3.

Mirelurk eggs contain a various amount of mirelurk meat which can be eaten for health or sold for caps. It is not known how the eggs are laid as it is impossible to tell whether mirelurks are male or female. Mirelurk eggs appear to be a pile of greenish-brown spheres moulded into a cone formation when looked at. The eggs will almost always be guarded by mirelurks, mirelurk hunters and/or mirelurk kings.

Stalactite mirelurk egg clutch
Add an image to this gallery
Retrieved from "https://fallout.fandom.com/wiki/Mirelurk_egg_(Fallout_3)?oldid=2827752"
Community content is available under CC-BY-SA unless otherwise noted.