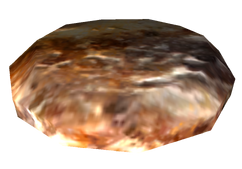 Mirelurk cakes are savory cakes that are made with mirelurk meat. Despite the source material, they are altogether inferior to the original meat, healing only a quarter of the HP and with a rad value one higher. In this sense, they are closer to hatchling mirelurk meat. A recipe for the cakes can be found in the Anchorage Memorial.

In the Anchorage Memorial, the Lone Wanderer can find Ted's stash containing the recipe for mirelurk cakes. To get it, they must find the necessary door component to unlock the storage room, which has a key to the stash and a holotape on how to find it. The stash itself is hidden in one of the refrigerators on the level beneath the kitchen area. Having the key in the inventory "activates" the stash and generates the items in the fridge. The recipe is not like schematics and it isn't possible to make the cakes even with possession of it.

The recipe calls for:

Remove any shell from lurk. In bucket, toss together bread, egg, scrub and mayo until moistened, but do not over mix. Add any available spices for taste.

In heavy pan, fry cakes in oil, turning once until both sides are brown.

Mirelurk cakes can mostly be found with diner merchants. Gary Staley, the owner of Rivet City market diner believes he is something of an expert at making them, although the cakes available at the Galley are exactly the same as everywhere else. A large number can be found in the fridges in the Anchorage Memorial.

Retrieved from "https://fallout.fandom.com/wiki/Mirelurk_cakes?oldid=3447886"
Community content is available under CC-BY-SA unless otherwise noted.