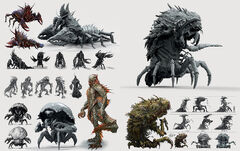 “Most Mirelurks are heavily armored and resistant to most forms of damage, but their faces are vulnerable.”— Fallout 4 loading screens

Mirelurks are the catch-all terminology for all three large crustacean mutants that dwell in the mires of the Commonwealth.

One of the most common variants of the mirelurk, Scylla serrata horrendus is the result of mixing between Chesapeake Bay horseshoe and blue crabs. Regional variations exist: for example, crab mirelurks in the Capital Wasteland tend to be bipedal and slimmer, while those in the Commonwealth and Appalachia (migrating from Chesapeake Bay[1]) are quadrupedal and rounder.[2]

Their most noticeable feature is the large, chitinous shell that provides excellent resistance to firearms, melee weapons and even energy guns. Soft body parts, such as their faces and sections of their abdomen, are much less resistant.[3][4][5] Of course, that only applies to adult mirelurks. The shell's chitin takes time to harden and young mirelurks are quite vulnerable at that stage of their life.[6]

One feature of crab mirelurks is that they instinctively know how to protect themselves with their shell. When faced with prey that can attack them at range, a crab mirelurk will lower its head to cover its body with the chitinous shell, greatly increasing its ability to survive.[7] Other animals tend to avoid mirelurks, perhaps instinctively realizing the danger posed by the shell.[8]

When hunting, mirelurks rely on their extraordinary sense of smell, with their poor eyesight a secondary aid. They catch their prey with their primary large claws. Once immobilized, the prey is then stripped down and consumed with the claws on their abdomen, capable of stripping animals down to the bone within minutes.[8]

Most adult mirelurk variants have shells and pincers resembling those of horseshoe crabs, while their offspring resemble mole crabs. The queen, on the other hand, has a shell that resembles that of a giant isopod or spider crab. The hunter variant appears to be a lobster.[9] Finally, the mirelurk king is unique in that it bears no resemblance to any sort of crustacean, and may instead be a heavily mutated frog or fish.

All mirelurks (excluding mirelurk kings and softshell mirelurks) are protected by a thick shell which is difficult to penetrate, even with powerful ballistic weapons. The face is unarmored but a small target, and when charging a mirelurk will often lower its head to protect this area. However, the face will inevitably be exposed once the creature commences close combat. Extremities are also more vulnerable than the rest of the body, though not as much as the face.

Typical specimens in particular resemble mirelurk hunters from the Capital Wasteland, but also differ in several aspects, such as is seen with their legs. This specimen also walks in a mixed crab/spider-like motion, which is atypical of mirelurk variants documented so far; in general they have more realistic qualities correlating to appearance.

Mirelurks will bury themselves in dirt or mud, with the only visual indication that they are present being the rounded backs of their shells, which resemble large, smooth rocks from a distance. They can also submerge themselves underwater when needed. V.A.T.S. will be able to detect them from a distance when used. It is not uncommon to see mirelurks with netting and seaweed caught on their carapaces or have barnacles latched on to them. Typical mirelurks and their variants can occasionally be found feeding on sea creatures.

Mirelurks are mostly found in groups and thus often appreciate strength in numbers, and glowing mirelurks also deal radiation damage when in close quarters. Combine this with their generally high resilience and they can easily prove a challenge for low-level player characters.

Because of their thick shells, they can be quite hard to defeat in a melee fight, as they tend to hide their weak points when the player character is about to strike, or when they charge before revealing their body parts in order to attack. Because of their unique fighting style, melee weapons with the legendary modifiers "Penetrating" (attacks ignore 30% of enemy's damage resistance) and "Exterminator's" (specific bonus damage to mirelurks) are very useful against them.

As some companions mention, mirelurks have no way to protect themselves against mines, or any attack from below. Even being on a lower platform that can be shot through gives the player an advantage.

All mirelurk variants have a chance to be pacified through the Wasteland Whisperer perk.

When nearing a mirelurk nest, typically about half of its eggs will shake briefly and then hatch, revealing these small, aggressive crab-like creatures. The mirelurk queen can spawn several hatchlings to attack the player character. Their overall combat strength is practically identical to radroaches.

Mirelurk spawn are identical in statistics to mirelurk hatchlings but this variant is bigger. A few can be found at the bottom floor of the Massachusetts State House.

A Nuka-Cola imbued mirelurk hatchling, which can emerge from eggs littering the World of Refreshment attraction, or can be born from the Nukalurk queen. It shares the same looks as the mirelurk spawn, with the exception of its blue glow.

Weak, green mirelurks encountered at low levels and can be seen mixed in with stronger mirelurks at higher levels. Their meat provides more health when cooked than normal mirelurk meat.

The standard variant of mirelurk. Darker in appearance than softshell mirelurks, it is also more resilient and deals more damage per hit. It's stronger than the first variant, and probably older.

An irradiated variant of the mirelurk which is increasingly encountered as the player character levels up. Due to steady absorption of large quantities of radiation these mirelurks glow with its superabundance; their undersides are positively luminescent and a notable buildup of radiation in its eyestalks gives them a distinct feature even among "glowing" creatures.

Nukalurks make a return in add-on Nuka-World, they apparently mutated from regular mirelurks living in the river of Nuka-Cola Quantum that is part of the World of Refreshment attraction.

The most powerful type of the base mirelurk genus in terms of both resistances and damage potential, Bloodrage mirelurks were added to the game with the Far Harbor add-on. They have very dark carapaces, glowing red eyes and also emit a baleful reddish glow from their underside.

Despite their power and threat potential, killing a Bloodrage mirelurk awards significantly less experience than most of its lower-ranking variants.

The mirelurk queen is a rarely seen mirelurk variant, considerably larger and more dangerous than her offspring, and inflicts significantly more physical and radiation damage on the player character. Her arrival is announced with a great roar. Her acidic spittle rapidly damages anyone caught in it, but crippling her spouts will prevent her from using it. Once combat is initiated, the queen will occasionally eject a barrage of eggs that spawn a wave of hatchlings, an ability that is considered a grenade attack and therefore comes with the respective warning icons on the screen. She benefits from the same resistance as the regular mirelurks: an incredibly thick shell but a very soft skin.

Subsequent respawns may have her either already emerged and idling in her area, or else submerged if her first spawning-in is triggered by killing nearby mirelurks. Players can note her presence (as well as that of hidden Kings and Hunters) by sneaking to triangulate her location, and then trigger her appearance with an AOE attack, such as an explosive or a ground slam from power armor.

One occupies the Castle and is fought when the Minutemen retake it. Destroying its eggs prior to acquiring Taking Independence also causes her to become enraged and fight.

The Island is home to several mirelurk queens as well. One has its nest at the bottom of Northwood Ridge Quarry, another one plays a role in the Rite of Passage quest.

A mirelurk queen may also occupy the east dig site of Vault 88 when finding the Vault-Tec water pump in the Vault-Tec Workshop add-on. One can also be found at Nuka-World 's Northpoint reservoir (killing all the mirelurks here will spawn a mirelurk queen) and southeast of Grandchester Mystery Mansion.

Mirelurk queens are considered giant creatures in-game, therefore, killing them counts towards the achievement ...The Harder They Fall.

Nukalurk queens can only be found in the Nuka-Cola bottling plant. She is a unique version of the mirelurk queen and has a blue glow due to the strontium isotope from Nuka-Cola Quantum. She has a large health pool, but when the player character finally kills her she drops queen Nukalurk meat.

This type of mirelurk has mutated from the local lobster population.[9] They are significantly more resilient than regular mirelurks and gain the ability to spit acid at its enemies, as well as more powerful attacks. While the common mirelurk is vulnerable to headshots, the head of the mirelurk hunter is much stronger.[citation needed] A few can be found at Spectacle Island, and others may spawn in the tunnels during The Big Dig.

Mirelurk hunters that have been born afflicted with albinism, giving them a distinguishable pinkish-white skin color signature to albino creatures. While their attacks are indifferent from that of a regular mirelurk hunter, they are protected by higher resistances. They, as with most albino creatures, are very rare and appear only by chance.

A mirelurk hunter that has absorbed great amounts of Nuka-Cola Quantum, making their shells glow blue. They behave identically to a normal mirelurk hunter.

Mirelurk kings do not resemble the crab-like mirelurks, instead appearing to be heavily mutated frogs based on sounds they make and the webbing between their fingers and toes. They are very fast and can easily kill a low level player character in seconds. Unlike the other mirelurks, they have a ranged sonic projectile attack that is particularly effective at crippling the target's head. Mirelurk kings have less health than glowing mirelurks, mirelurk hunters or mirelurk queens, although they are much more agile and efficient at range. One can be found in a room alongside power armor, a few tunnels into the The Big Dig. Another one can be located behind Rook family house on the shore. Up to four can be found at Cutler Bend, and a few may be encountered at Spectacle Island. Another can be found inside a crypt to the north of Electrical Hobbyist's Club underneath the skybridge. He will appear and attack after taking the lone mirelurk egg.

A variant of the mirelurk king glowing with the excesses of inordinate radiation absorption. It inflicts radiation damage when executing a melee attack.

A mirelurk king imbued with high amounts of Nuka-Cola Quantum, causing it to glow blue. It has greater health than other mirelurk kings as a result of this, and has stronger attacks as well.

Mirelurks appear in Fallout 4 and its add-ons Far Harbor and Nuka-World.

Mirelurk queen, note the presence of what will later become the fog crawler 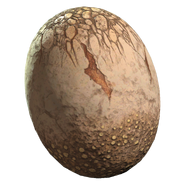 Nukalurk queen during the day 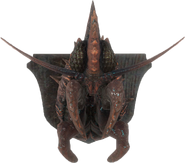 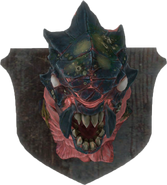 A mounted mirelurk queen claw
Add an image to this gallery

Retrieved from "https://fallout.fandom.com/wiki/Mirelurk_(Fallout_4)?oldid=3135237"
Community content is available under CC-BY-SA unless otherwise noted.