Mirelurk is a commonly used term referring to a range of mutated aquatic species endemic to the Eastern Seaboard, particularly the Capital Wasteland, the Commonwealth and Appalachia.

A similar term, lakelurk, is used to refer to species in the Colorado watershed in the Mojave Wasteland.

Mirelurks have the dubious distinction of being one of the first radioactive mutants to emerge into the world, as a result of widespread radioactive pollution of the environment by United States megacorporations such as Poseidon Energy and General Atomics. Environmental organizations such as Nahant Oceanological Society, dedicated to saving the oceans, attempted a variety of last-ditch efforts to raise awareness of this problem and encourage radical action to curtail environmental destruction at the hands of reckless corporations.[1] However, their efforts were in vain. Ignored by authorities, to the point where they refused to even take their phone calls (as was the case with the Boston Port Authority), they attempted to garner attention by reporting the situation to the Galaxy News Network. The media ignored their reports as well, except for running a story about the upcoming shellfish season and how great it was going to be. Of course, it neglected to mention that the average increase in mass on the order of 14% in crabs and 12% in lobsters meant that the available food supply would run out quickly, leading to colony collapse and localized extinction.[2]

Although the Great War ended corporate pollution, it was replaced by overwhelming amounts of nuclear fallout instead. In the ensuing melting pot of mutations, the modern mirelurks emerged. Attempts to classify the resulting creatures have proven difficult. The crab mirelurk, for example, contains multiple phylum markers from two distinct and unrelated species: The Atlantic Horseshoe Crab (Limulus polyphemus) and the Atlantic Blue Crab (Callinectes sapidus.) As such, it would be necessary to catalog it as simultaneously belonging to the Crustacea/Chelicerata subphylums, with the simultaneous classification of two distinct classes (Merostomata and Malacostraca.) Both an Enclave researcher and the Lone Wanderer assigned it its own classification: Scylla serrata horrendus.[3][4] This groups Mirelurks into the genus, Scylla (refering to a Greek sea monster), and the species, serrata (serrata being latin for 'forming a row of small sharp projections resembling the teeth of a saw'). The last part "horrendus", Latin for "dreadful" is the subspecies. The knowledge that mirelurks were much smaller before the bombs dropped and mutated them still persists among some wastelanders in the Commonwealth.[5] Mirelurks are also known to have a pronounced sensitivity towards white noise, as seen in Vault 92 and on Spectacle Island.

Although mirelurks tend to inhabit polluted rivers, coastal waters, and sewers, their meat is considered a delicacy among wastelanders. Mirelurk hunters or herders can count on a steady demand for their meat and make a high profit selling it to wasteland traders.[6] However, the size of the meat market means competition is stiff and suppliers can be targeted by rivals attempting to knock them out of the market (sometimes literally).[7] They also grow remarkably fast, requiring just a few weeks for them to reach maturity. If corraled and domesticated, mirelurks can be a flexible supply of food. The Free States did, in fact, entertain such an option.[8]

Mirelurks can also be a blight on permanent settlements, as is the case with Rivet City. Mirelurks nesting below inhabited decks are a continued nuisance for denizens of the city, despite regular extermination operations by the city's security team.[9] Infestations are made even worse by the fact that mirelurks have adapted to lay their eggs in multiple small nests throughout shallow water (unlike pre-War crustaceans that adhered their eggs to their body); if disturbed, the larval mirelurks within exhibit incredible predacious behavior and are ready to attack if need be.[10]

According to Ada, the social structure of mirelurk species resembles a caste system.[11]

One of the most common variants of the mirelurk, Scylla serrata horrendus (a name used by both the Enclave and the Lone Wanderer) is the result of mixing between horseshoe and blue crabs.[3][4]

Their most noticeable feature is the large, chitinous shell that provides excellent resistance to firearms, melee weapons, and even ray guns. Soft body parts, such as their faces and sections of their abdomen, are much less resistant.[3][12][13]

Crab mirelurks instinctively know how to protect themselves with their shell. When faced with prey that can attack them at long range, a crab mirelurk will lower its head to cover its body with the chitinous shell, greatly increasing its ability to survive.[14] Other animals tend to avoid mirelurks, perhaps instinctively realizing the danger posed by the shell.[8]

When hunting, mirelurks rely on their extraordinary sense of smell, with their poor eyesight a secondary aid. They catch their prey with their primary large claws. Once immobilized, abdominal claws strip the helpless prey as it is consumed down to the bone within minutes.[8] 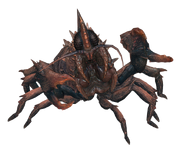 The lobster mirelurk is a unique mutation found in the Commonwealth environs, called mirelurk hunter by its denizens. The most characteristic elements of this kind of mirelurk are the oversized claws and its head, housing the eyes and antennae, its primary sensory organs.[15] Although they lack the protection of their crab cousins, lobster mirelurks make up for it with their more powerful melee strikes and the ability to spit corrosive acid at targets.[10] 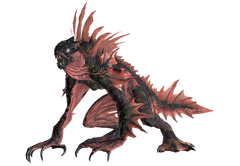 Mirelurk kings have distinct adaptations to its water-rich environment, with pronounced webbed extremities and numerous fins all over its body. Their coloration is also red, rather than the typical blue, and possess a defining "crowned and mantle" appearance. They also have the ability to cloak themselves in order to ambush unsuspecting prey.[16] They also uniquely possess both gills and lungs that were developed independently, allowing kings to survive on both land or water easily.[17]

Mirelurk kings appear humanoid in shape, but have evolved from radiation and are distinctly non-sapien in their evolution. The upper and lower fins developed into jointed claws that can grab or slash, as well as flex 180 degrees. The evolutionary line of the mirelurk kings is completely separate from the crab-based mirelurks. Having developed independently, the intelligence of mirelurk kings is much higher than crab mirelurks and a symbiotic relationship formed from mirelurk kings where they developed an ability to control the less-intelligent mirelurks.[18]

The reptilian mirelurk kings, standing upright on two feet, they are the most human-like of the mirelurks.[19] They have a symbiotic relationship with the other mirelurk types and commonly employ ranged attacks. The mirelurk king lacks the characteristic shell of other mirelurk variants but makes up for it with their thick, leathery skin, powerful arms and legs, and the ability to shriek at their attackers. This sonic attack is particularly dangerous against unaware or weakened targets. The swamplurk queen, found in Point Lookout, is highly adapted to its swampy environment. It is coated in a layer of algae which provides a degree of natural camouflage, and has the ability to spit corrosive, radioactive acid at its prey. Endemic to Lake Mead and the Colorado River is the lakelurk. They have a distinct, green coloration and the usual sonic attack.

Early concepts had the idea for their opposable claws to allow them to employ weapons such as machine guns, though this was not implemented in the final design.[20] 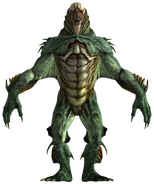 “The mirelurks got a bit of a reboot visually, as well as significant expansion on the variants with the addition of the hunter and the queen. This was simply a case of wanting to try something a bit more animalistic and to move away from the guy-in-a-suit vibe of the original.”— The Art of Fallout 4
“Though it appears human in shape, the Mirelurk King evolved in non-sapien ways; namely, its upper and lower fins have developed joints and claws capable of flexion. Similarly, there is no evolutionary link between the Mirelurk Kings and the Mirelurks themselves; the story I told myself while building this Lovecraftian monstrosity was that his kind had evolved in ways that allowed them to dominate and perhaps control their less intelligent Mirelurk peers.

To reinforce this idea, I doubled down on the “Kingly” imagery by sculpting a hard-shelled crown (which was in the concept art to begin with) a la Dunkleosteus, as well as dressing him in long, sweeping red “gill robes,” like the ancient western kings (which was not in the concept art). I built him anticipating that he’d walk upright, proudly, with this chest out - like the Fallout 3 variety. Alas, the animator chose a more froggish route.

The model itself is 9.1K triangles, the textures 2048. It was created for Fallout 4.”— Jonah Lobe