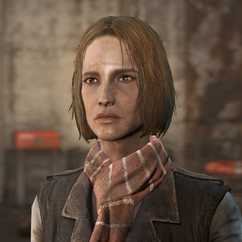 “I can't wait to get out of here and travel.”

Miranda is a synth living in Acadia in 2287.

Miranda lived in the Commonwealth for some time before moving to Acadia, referring to it as "back home" in conversation. She will ask the Sole Survivor about the state of affairs in the Commonwealth and express hope both that things settle down and that she will get a chance to see it again.

While not explicitly stated, it is implied that Miranda is one of a few known characters to live as a free synth in the Commonwealth without receiving a memory wipe from the Railroad and that she only moved to Acadia when the situation in the Commonwealth regarding Institute activity and hostility to synths became untenable.

Her demeanor is generally friendly, welcoming the player character to Acadia and enjoying hearing news from them about the Commonwealth.

Miranda appears only in the Fallout 4 add-on Far Harbor.

Retrieved from "https://fallout.fandom.com/wiki/Miranda?oldid=3249498"
Community content is available under CC-BY-SA unless otherwise noted.