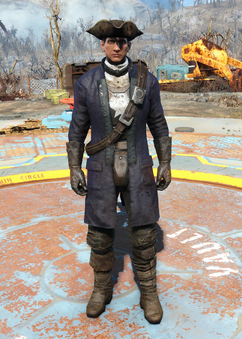 The Minutemen general's uniform and hat are an outfit that can be obtained in Fallout 4.

It is the traditional armor of the Minutemen's general and is styled after uniforms from the American Revolution.

The Minutemen general's uniform appears as a dark blue overcoat with four gold stars on each side of the collar, worn over a white shirt. On top of the shirt is a sturdy combat armor chest piece. The hat is a typical tricorn hat.

When trying to equip headwear such as bandanas, the general's outfit will unequip.

The outfit is found on the corpse of General McGann in the Castle tunnels. These become accessible during and after the Minutemen quest Old Guns. 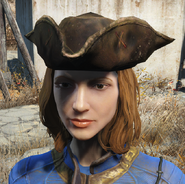