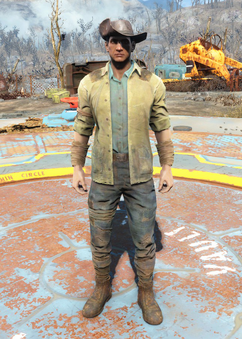 000316D4
“They even got an old broad dressed like a fortune teller and some joker in a cowboy hat. Gonna ask Jared for more men to take this caravan down. That fucking hat is mine!”— A quote regarding Preston Garvey on Gristle's terminal

The Minuteman outfit is a colonial style field uniform worn by most minutemen, consisting of a baby blue button-up shirt with a tattered jacket with rolled sleeves worn over it with jeans and boots. It provides a small bonus to Agility and Perception when worn. It is the standard uniform for the Commonwealth Minutemen. It is one of a few outfits that allows all armor pieces to be equipped. The outfit's Damage Resistance can be improved using the ballistic weave upgrade.

Preston Garvey is the only member of the Minutemen who wears the hat. 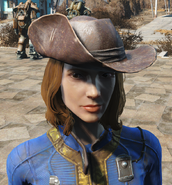