The minigun is a heavy gun in Fallout 76.

The minigun is a motorized Gatling-style rapid-fire weapon commonly employed by the military, or other lesser factions that managed to acquire such a weapon. Miniguns can be found as a handheld heavy assault and support weapon. It was one of the most powerful weapons at the disposal of the Appalachian chapter of the Brotherhood of Steel, and was crucial in their fight against the scorchbeasts. It can still be often found wielded by super mutant overlords. It uses 5mm rounds as ammo.

It requires a moment to spin up before it actually starts firing, but makes up for the delay with a high rate of fire and large ammunition capacity. As can be expected from a motorized rotary gun, it burns through ammo reserves at a high rate, even more so when equipped with accelerated barrels. Investing points in the Scrounger perk card and installing the tri-barrel modification helps to alleviate this issue to some extent. The latter significantly increases the minigun's per-shot damage, range, and accuracy at the cost of a sharp drop in firing rate, all of which make the weapon a lot more cost-efficient and effective at mid to long range.

The minigun fires large volumes of low-damage shots with a high spread, rendering it difficult to take down enemies with high Hitpoints and Damage Resistance, such as a scorchbeast or deathclaw. When fired continuously, the minigun's barrel cluster glows ever hotter, eventually reaching a bright yellow color.

Weapon modifications will modify an existing weapon, and any modifications previously equipped on the weapon will be destroyed, not unequipped. Loose mods cannot be crafted. For modifications unlocked through scrapping, the corresponding weapon must be scrapped in order to learn how to craft it. 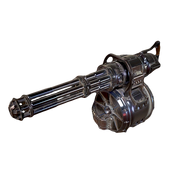 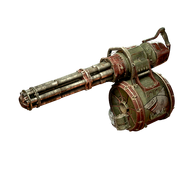 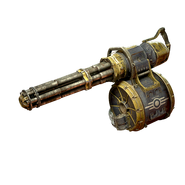