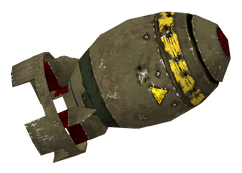 The mini nuke or micro-nuke[1] is a football-sized tactical nuclear warhead designed for use in a nuclear catapult weapon in Fallout 3.

Mini nukes are the most expensive type of ammunition due to their rarity, ranging from 250 to 400 caps each, depending on the player character's Barter skill. They are the ammunition for the two most powerful weapons in the game: the Fat Man and the experimental MIRV, doing many times more damage than any other weapon even with a low Big Guns skill. The explosion when fired is powerful, causing a characteristic mushroom cloud and leaving residual radioactivity. The users themselves may absorb radiation if they are close to the projectile even after detonation.

There are a total of 70 free mini nukes in Fallout 3. Two more can be obtained by doing various quests. Another two are in random encounters, one of which only occurs after completing the Reilly's Rangers quest. Another can be found in Operation: Anchorage, 13 in Broken Steel, eight in Point Lookout and two in Mothership Zeta, making for 98 in total with all add-ons. 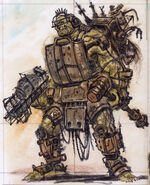 The Art of Fallout 3, a super mutant with a Fat Man and mini nuke
Add an image to this gallery

Retrieved from "https://fallout.fandom.com/wiki/Mini_nuke_(Fallout_3)?oldid=3226710"
Community content is available under CC-BY-SA unless otherwise noted.