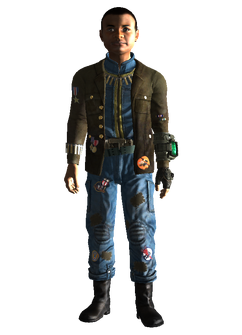 “You bet I will, I'm almost old enough to fly in the VR sims. That'll be awesome!”

Mini Boomers are children in the Nellis Air Force Base in 2281.

Mini Boomers are the Boomer children at Nellis Air Force Base. The children can be found wandering (usually running) around the airfield; they also have their own barracks and attend school. Pete and Lindsay are named Mini Boomers.

Add an image to this gallery
Retrieved from "https://fallout.fandom.com/wiki/Mini_Boomer?oldid=3112010"
Community content is available under CC-BY-SA unless otherwise noted.