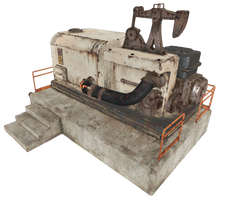 Extractors are a type of workshop object in Fallout 76.

Extractors can both produce raw and finished materials. Those producing raw materials such as mineral and junk extractors can be built at claimed public workshops and at or nearby the player character's C.A.M.P. if the corresponding resource deposits are present.

Finished materials such as food, ammunition, and fusion cores are only available for use at power plant workshops and cannot be built. Only one processor is present at each location, including Poseidon Energy Plant yard WV-06, Monongah power plant, and Thunder Mountain power plant. An ammunition plant is also available at the converted munitions factory. The color of the machine is determined by what resource it is designed to collect, differentiating one from another.

Crafting plans for the extractors are automatically unlocked by capturing a public workshop for the first time during a Claim Workshop event quest. When connected to power, most extractors produce roughly 25 resources per hour.

The extractor type is limited by the resource deposit type. For example, a steel mineral extractor can only be placed on an iron deposit. Extractors have a maximum storage capacity that varies from type to type and must be checked and emptied regularly in order for them to continue producing resources.

Extractors can be built at claimed public workshops and at or nearby the player character's C.A.M.P. if the corresponding resource deposits are present.

The factories that are available for use at power plant or factory workshops cannot be constructed or moved by the player character. They can be destroyed and rendered non-functional from damage by enemies, especially during Defend Workshop events, or by other player characters during an Attack on Workshop event, and will need to be repaired before they can resume production. They require 100 electricity to function, powered by either power plant boxes if the corresponding Powering Up event was successfully completed or by generators made by the player character. 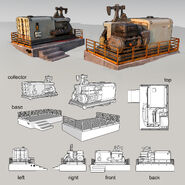 Concept art by Christopher Ortega
Add a photo to this gallery
Retrieved from "https://fallout.fandom.com/wiki/Mineral_extractor?oldid=3498397"
Community content is available under CC-BY-SA unless otherwise noted.