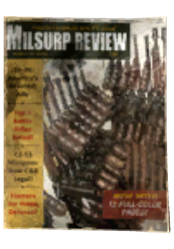 Milsurp Review is a skill magazine in Fallout: New Vegas.

The front cover of the magazine depicts racks of Tommy guns on the front cover, advertising its 12 full color pages and articles such as, .308: America's Greatest Ally, Top 5 Battle rifles Rated!, CZ-57 Minigun: New AND Legal!, and Flamers for Home Defense?

The front cover of the magazine depicts numerous Thompson submachine guns, a weapon that isn't available in the base game. It does appear in Honest Hearts in its military form as the .45 Auto SMG.[1]

Reading this magazine raises the Guns skill by 10 points (20 points with the Comprehension perk) for 60 seconds (180 seconds with Retention).

Below is a list of all fixed locations of Milsurp Review skill magazines in Fallout: New Vegas and its add-ons. For an overview of magazines per location, see the main overview page.

The name Millsurp Review might not be shown on your Pip-Boy, instead you see an empty space where the name should be, but you can still use it. [verified]

Retrieved from "https://fallout.fandom.com/wiki/Milsurp_Review?oldid=3316886"
Community content is available under CC-BY-SA unless otherwise noted.