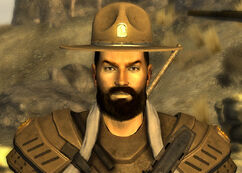 Back in Your Own Backyard 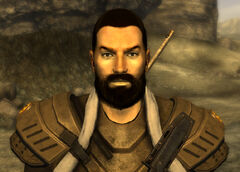 Ranger Milo, without his hat

“Nope. I'm just the only ranger around. The rest of the kids here are troopers. Inexperienced, out-numbered and under-equipped.”

Ranger Milo is an NCR Ranger living in the Mojave Wasteland in 2281. He is found patrolling at a small NCR checkpoint on the road heading east to Nelson.

He saved many NCR troopers during the Battle of Nelson. An uncompromising individual, he is not pleased by the Legion's use of NCR hostages to discourage attacks, and believes that killing them is the only way to get his troops to retaliate.

Retrieved from "https://fallout.fandom.com/wiki/Milo_(Fallout:_New_Vegas)?oldid=3271034"
Community content is available under CC-BY-SA unless otherwise noted.