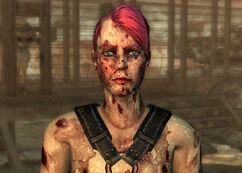 “You look like you can handle yourself. Could you look for him and bring him back?”

Milly is a Pitt slave in the Pitt's Downtown in the year 2277.

Part of a tiny enclave of Pitt slaves that exists near the Market Square in the Downtown area, Milly is a close friend of Wild Bill and is desperate to know her friend's whereabouts. She wanders the alleys, hoping to catch a glimpse of her friend. She has also appropriated some stimpaks, hiding them in various nondescript objects throughout Downtown.[1]

Milly appears only in The Pitt add-on for Fallout 3.

Retrieved from "https://fallout.fandom.com/wiki/Milly?oldid=3439809"
Community content is available under CC-BY-SA unless otherwise noted.