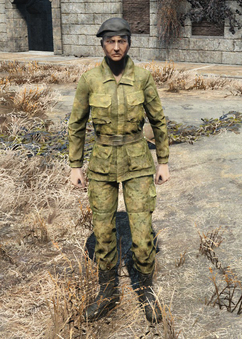 The military fatigues and military cap is a set of clothing that can be obtained in Fallout 4.

Military fatigues provide an Agility bonus of 2 and 5 Energy Resistance. They do not take any armor slots, thus can be worn underneath a full set of armor. Unlike the army fatigues, there's no clean variant available.

By progressing through the DIA cache quests for the Railroad, given by P.A.M., Tinker Tom will unlock the ability to upgrade the defense of this piece of clothing. The amount of upgrade available depends on the level of Armorer perk.

The military cap is a lightweight piece of headwear that counts as a hat and takes up the respective armor slot, meaning it can be combined with eyewear and a mask. It looks like a black beret and offers a bonus to Perception but nothing in terms of Damage Resistance, Energy Resistance or Radiation Resistance.

The military cap can't be upgraded with the ballistic weave armor mod.

The Military fatigues are referred to as Ronnie_Uniform_Body in the game files.

Retrieved from "https://fallout.fandom.com/wiki/Military_fatigues_(Fallout_4)?oldid=3155347"
Community content is available under CC-BY-SA unless otherwise noted.