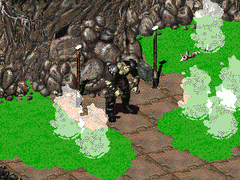 Melchior needs to be put down to get the disk
“The label reads: Radio Transmission log checkpoint 4.”— In-game description

Military base holodisk 4 is a holodisk in Fallout 2.

The excavation is going according to schedule. Judging by the old base blueprints, we should be reaching the Vats area shortly. Increased levels of the FEV virus

are present in both the air and soil samples we've taken. Luckily our suits filter out the virus. Tell the members of the Enclave they should have a pure sample of the mutagen soon.

Also, I've begun to notice some changes in the miners. They seem to be showing signs of increased strength, stamina and a slight change in skin tone; obvious signs of mutations by the FEV. The men are getting nervous, as they too have noticed the change. Although I've increased the number of guards, I fear if the workers completely mutate, we'll be vastly outnumbered. It is my hope, that since we are using the local inhabitants as a work force, full mutation won't occur unless they are directly exposed (dipped) in a pure source or prolonged exposure to the virus occurs. As you recall, minute amounts of the virus have been detected throughout this region. Tests on subjects living in this area have shown that they have built up a tolerance to the FEV virus. However, I advise caution since exposure to this level of the FEV virus was never entered into the calculations. I advise that you rig the entrance to the base to collapse as soon as a pure sample is obtained. This will seal the exposed miners into the base and prevent unfriendlies from obtaining the virus once we are gone.