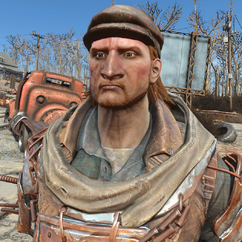 “Bullshit. You can't just put something between two pieces of bread and claim it's a sandwich. Does that mean a loaf of bread is technically a bread sandwich?”

Mikey is a wastelander in the Commonwealth in 2287. He can be found during a random encounter arguing with Moss about sandwiches.

Mikey argues against the idea that anything put between two pieces of bread is a sandwich, in opposition to Moss, who considers the more important factor to be how the meal is held.

Mikey appears only in Fallout 4.

Moss and Mikey stewing a pot
Add an image to this gallery
Retrieved from "https://fallout.fandom.com/wiki/Mikey_(Fallout_4)?oldid=3292908"
Community content is available under CC-BY-SA unless otherwise noted.