Mike Tiller is a member of the Settlers in Appalachia.

Mike was meant to be helping record a weapon demonstration with the town watch,[1] ordered by Ward at the East Mountain lookout. However, he paid little attention to the demonstration, preferring to work on a terminal. When another settler asked him to get off the terminal and help with the recording, he went to lock the terminal and then grabbed a rocket launcher incorrectly, causing it to fire and kill the other four settlers.[2]

Upon realizing what he had done, he was mortified and fled to the nearby Kerwood Mine. He decided to hide out of guilt, believing that the others would view him as a murderer.[3]

Supplying Demands: During this quest, it is up to the player to convince Mike to forgive himself for the incident and return to Foundation, as well as to return the rocket launchers he took to their rightful owners, the Brotherhood of Steel, or to kill him.

If he is spared, he mentions Ward thought it would be best if he is no longer on guard duty, so he helps out Foundation in other ways. He mentions he still has trouble sleeping at night.

If he is killed, the BOS weapons key can be obtained from his body. When reporting back to Gloria and Tad Chance, the player may choose to lie by claiming there was an accident with the weapons, lie by claiming Mike "went nuts" and killed everyone, or come clean about his death. This will affect the rest of the quest.

Mike Tiller appears only in Fallout 76, introduced in the Steel Dawn update.

Carl McKevitt was a contributor to Mike Tiller's design with the main goal of creating a character that the player could decide to kill or not.[Non-canon 1] 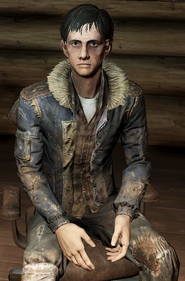 Mike if he is encouraged to face everyone at Foundation

Mike if he is murdered by the player