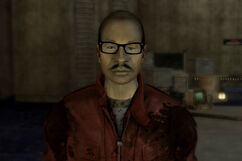 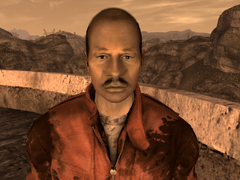 Mike without his glasses

“Hello there youngster. Welcome to my baby.”

Mike Lawson is the head engineer at Hoover Dam in 2281.

Mike Lawson has been at that Hoover Dam since well before the first battle. When he first came to the dam, it only had one turbine spinning, but after the First Battle of Hoover Dam, he managed to get six of the eight turbines running though two of them have ceased working.[3] This is due to their intakes becoming clogged, however, unclogging them is low on the priority list.[4] During the battle, he spent his time in the power station.[5]

Mike can be found on the bottom floor of Hoover Dam power plant 01.

Retrieved from "https://fallout.fandom.com/wiki/Mike_Lawson?oldid=3367878"
Community content is available under CC-BY-SA unless otherwise noted.