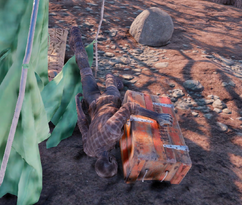 Miguel Caldera was a member of the Responders in Appalachia in 2102.

Prior to the Great War, Miguel was a programmer working for Vault-Tec. Burdened by soul-crushing office programming jobs, he longed for nothing more than to live in the country and focus on hiking. [1]

After the bombs fell, he survived for several years in the wilderness, camping in the woods with a protectron which he had hacked to guard him as he slept.[1] He met Dassa Ben-Ami one day when she was hunting for rabbits and agreed to join the Responders,[2] acing their survival training programs.[3] His main reason for doing so was his fear of scorchbeasts and his desire to no longer live alone.[4] As a programmer, he became a boon for the Responders, becoming responsible for training volunteers and developing programs for robots and automated kiosks to take over tasks, in addition to reprogramming robots to fulfill roles needed by the Responders' operations. He also helped train others in camping and survival, leaning on the experience he had gained since the War.[5]

His first major personal achievement was the creation of Mr. Fluffy, a Protectron bodyguard and assistant. The robot, stitched together from countless damaged Protectrons, had an attitude problem and was none too pleased by its name (metallic surfaces are by definition not fluffy and the failure to compute aggravated Fluffy's neural network).[6]

One day, during a supply run between Morgantown Airport and Flatwoods, he met a Volunteer responsible for delivering supplies named Garry Wilkins and they fell in love.[1][7] As Garry was stationed at the Flatwoods outpost at the time, Miguel would make excuses to spend time there, including by programming elaborate systems which needed his attention.[2] They both eventually transferred to Morgantown Airport and Miguel devoted his time to lead Advanced Training classes on survival and camp building, as well as continuing his engineering and programming duties. At the same time, he was developing a reset program to make Mr. Fluffy less unconventional, including stopping him from looming beside and over him all the time, ruining his sex life.[8]

After Garry was killed during a scorched attack on the airport, Miguel retreated to the woods after burying him in the Responder graveyard nearby. He took his Mr. Fluffy with him and left Maria Chavez a message to tell her where he had gone, saying that he had to "figure things out".[9] His last check in with the Responders was at Morgantown Airport on 15 June 2096.[10]

By the time the player character finds him in 2102, he lies dead in his camp next to his destroyed tent. Mr. Fluffy questions his body as to why he didn't follow his own advice about building walls and turrets and why he decided to cook Delbert's chili, with an aroma that the robot states could be detected clear from the airport tarmac, against Mr. Fluffy's advice. This was a deliberate decision, mirroring the way that he claimed he wanted to die - not in an office, but with "a pot of Delbert's chili, in the woods, and under the beautiful stars."[11]

Sometime prior to his death, Caldera wrote the Arachne killswitch program to be used on Athena.[12]

Miguel Caldera appears only in Fallout 76 and is mentioned in its update Wastelanders.

Retrieved from "https://fallout.fandom.com/wiki/Miguel_Caldera?oldid=3252060"
Community content is available under CC-BY-SA unless otherwise noted.