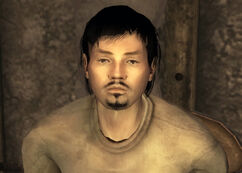 “If you're down on your luck and need some caps, I buy just about anything. Of course, I've also got plenty of things for sale, too.”

Miguel is a resident of Westside who runs a pawn shop in 2281.

An affable fellow, Miguel is the last resort for people down on their luck, buying what they offer at reasonable prices and selling them for a profit. His pawn shop has been in the family for at least three generations. In fact, Miguel took over the business when his grandfather lost his life to the Fiends. He has since built up an impressive collection of odds and ends.

The death of his grandfather has resulted in Miguel having a deep hatred for the Fiends, just as much as the other residents hold a grudge against the vicious raider gang, for the fear of the next potential attack.

Retrieved from "https://fallout.fandom.com/wiki/Miguel_(Fallout:_New_Vegas)?oldid=3315681"
Community content is available under CC-BY-SA unless otherwise noted.