After installing the add-on, one will receive a radio signal in the form of a mysterious broadcast about an invitation to the "Midnight Science Fiction Feature!" at the Mojave Drive-in. After arriving, a satellite is found crashed in the middle of the drive-in lot.

Between 11 pm and 3 am the satellite projects a movie of a peering eye on the drive-in's screen. Activating the satellite during this time will bring up the prompt window, explaining what the player character is about to enter, and that they won't be able to return until completion.

Additionally, the prompt explains that a minimum level of 15+ is recommended and that one may take their gear to Big MT. However, no companions are able to join the Courier and must be left in the Mojave. Selecting that the player character is ready will teleport them to Big MT and show the opening slide show of Old World Blues.

The title of this quest is a reference to the title theme song of The Rocky Horror Picture Show, Science Fiction/Double Feature. 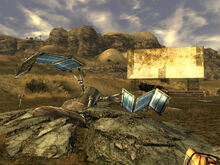 The satellite seen in daylight 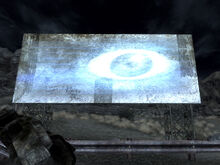 The movie, a large eye