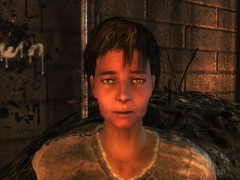 Midea without her head wrap

“What about me? I was born here. I'll probably die here. I've lived my whole life under Ashur's boot heel. The only thing that keeps me alive is the thought that I might be able to turn the tables someday.”

Midea is the matriarchal leader of the slaves in the Pitt in 2277.

Born in the Pitt, Midea has been a slave there her whole life. She is one of the oldest slaves in the Pitt and is dedicated to helping the Pitt Slaves. Despite having the fierceness to probably earn her freedom in the Arena, she chooses to stay with the slaves and see to it that someone is watching out for them. She concocted the kidnapping plan with Wernher shortly after he was enslaved, and she sees the baby as a tool to earn the freedom of her people.[1]

Midea appears only in the Fallout 3 add-on The Pitt.