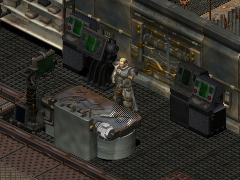 Midas Baracus is a mechanic in Bunker Delta in 2197.

Midas Baracus is a mechanic with a bad attitude, working for the Midwestern Brotherhood of Steel in Bunker Delta.

Despite having dark skin and black hair, Midas is wrongly seen in-game with white skin and blond hair.

Retrieved from "https://fallout.fandom.com/wiki/Midas_Baracus?oldid=3353238"
Community content is available under CC-BY-SA unless otherwise noted.