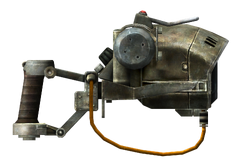 The microwave emitter is a unique energy weapon added to Fallout 3 in the Point Lookout add-on as the final reward of the add-on's main questline.

The microwave emitter uses the same in-game model as the Mesmetron. However, unlike the relatively rare mesmetron power cells made by Implied Hypnotics which are intended as non-lethal and to merely daze and confuse a target, the microwave emitter is modified to use the much more common military microfusion cells which are used by standard, lethal-force energy weapons.

Therefore, the emitter is intended as a lethal version of the Mesmetron which burns, sets on fire, explode, or disintegrates a target with blasts of intense and concentrated microwave radiation. Limb shots may cause gibbing even without the Bloody Mess perk, and headshots will cause heads to explode. Fatal critical hits will not turn enemies into piles of goo as with plasma weapons but will turn enemies into piles of ash, like with laser weapons.

The microwave emitter ignores damage resistance which, coupled with its rather large damage, makes it ideal for use against heavily armored foes.

The microwave emitter can fire a total of about 375 shots, the equivalent of 75 reloads, from full condition before breaking.

The microwave emitter is found at the end of the quest A Meeting of the Minds, in the reward vault behind Professor Calvert's brain in his underground lab beneath the Point Lookout Lighthouse. This is the final reward in the Point Lookout main questline.