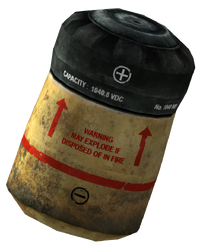 Microfusion breeder or MF breeder is a type of ammunition in Fallout: New Vegas.

A specially designed kind of energy cell that is unique in that it is not a physical object that can be gathered like other ammunition. Found only in Recharger weapons, these energy cells replenish their reserves over time, essentially providing infinite ammunition. Like other Energy weapon ammunition, it negates 2 points of Enemy DT. Unlike other power sources, however, it cannot be overcharged to deal extra damage.

A microfusion breeder cell is the default ammunition always included with any "recharger" type energy weapon found or purchased in the game, and is itself never found in the game world or sold by vendors. It holds no monetary value or weight encumbrance, even within hardcore mode. Under normal circumstances, this ammunition is not visible in the character's inventory. As a general rule, it is usually only able to be seen or interacted with via a glitch when interacting with containers.

From the name it is likely to be associated with breeder reactors, which are a type of nuclear fission reactor that is able to produce more fissile material than it uses.

Retrieved from "https://fallout.fandom.com/wiki/Microfusion_breeder?oldid=3203801"
Community content is available under CC-BY-SA unless otherwise noted.