Mick is a pre-made player character in Fallout Tactics.

Mick is not the brightest tool in the box, which is probably why he volunteered for the Brotherhood of Steel. They took him because he is handy with a gun. Reasonably strong and agile, he has the potential to become a good frontline soldier.

Mick appears only in Fallout Tactics.

Mick strongly resembles Tariq Raheem, one of the Fallout Tactics concept artists. The similarity is even more apparent when compared with Tariq's self-portraits. 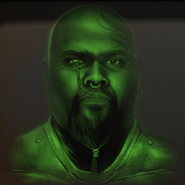