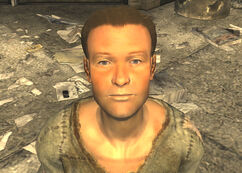 “We've got stuff we're not even allowed to sell, people. Only at Mick and Ralph's!”

The young boy is employed by Mick and Ralph, who pay him to boost the public's awareness of Mick & Ralph's establishment and help bring in customers. He can be seen at the gate connecting Freeside's west and east sections together.