“We've got stuff we're not even allowed to sell, people! Only at Mick and Ralph's!”— Mick & Ralph's crier, Fallout: New Vegas

Providing some of the finest quality trinkets to discerning customers, while serving the riff-raff the usual low-grade armaments, Mick and his colleague Ralph run a thriving business from the seedier side of Freeside.

When coming into the building, Ralph will be sitting on the right behind his desk. There are shelves on the wall to the right of where Mick is standing, and a central "shelf" made of washing machines in the middle of the room. To the right of Mick is a staircase which leads to a room upstairs that comprises Mick and Ralph's bedrooms and a few other items such as washing machines and desks. 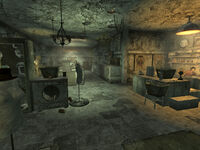 View at the store 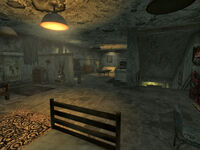 Mick & Ralph's as seen during daylight
Add an image to this gallery
Retrieved from "https://fallout.fandom.com/wiki/Mick_%26_Ralph%27s?oldid=2522609"
Community content is available under CC-BY-SA unless otherwise noted.