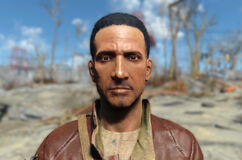 Michael spawned with base id

Michael Tournquist (2065–) was the oldest son of Wayne Tournquist and Bonnie Tournquist and a student at Malden Middle School. He was to be one of the initial resident subjects of Vault 75 in 2077.[1]

A citizen of Malden, Massachusetts, Michael's enrollment in Vault 75 was subsidized by the federal government[2] as part of the vault's experiment. However, he and his brother were raised to distrust their teachers and Vault-Tec. Their parents instead instilled in them a plan to survive together.

As their father instructed, instead of going into the vault, Michael managed to get his younger brother David away from the teachers and hide. After their father (who hacked the Med-Tek director's terminal, getting advanced warning) fled from his office at Med-Tek Laboratories on foot, he traveled to Malden Middle School to retrieve his children. Together, they made it to their home at the West Everett Estates and in their shelter just as the planes were passing overhead.[3] Michael's mother, Bonnie, however never made it home, becoming trapped at workat the Mass Bay Medical Center.[4]

Life in the shelter was a combination of fear and sorrow. All they could do was listen to the radio and gunfire; which was all that was outside their shelter for three days.[3] It was during this time that David continually asked when their mother was coming home. The only thing that Wayne told Michael was that "she was at the hospital helping people." Michael only glared at his father, knowing full well that it was a lie.[5]

They finally emerged from their shelter in late January 2078.[6] For the next three months, the surviving families in the neighborhood worked together to barricade and fortify the area.[7] They kept watch in shifts, and the kids all enjoyed getting to come outside.[8]

On April 30, Michael's father celebrated his wife's birthday with his children, trying to bake a cake but ultimately opening a can of frosting and writing in his journal.[8] After Leon Ames led raiders to the settlement, they attacked the estates, forcing David, Michael and Wayne to flee. In the commotion, Wayne and Michael grabbed David and ran away under fire.[9]

Michael Tournquist is mentioned only in Fallout 4.

Retrieved from "https://fallout.fandom.com/wiki/Michael_Tournquist?oldid=3269850"
Community content is available under CC-BY-SA unless otherwise noted.