CaucasianOld
“On the bright side, it's given me another reason to hit the drink!”

Michael Hawthorne is a frequent patron at Tenpenny Tower's Federalist Lounge and is known to be the local drunk.

Michael Hawthorne has dedicated his life (and life savings) to the pursuit of giddy drunkenness, staggering drunkenness, and finally, paralytic stupor. He spends the majority of every day drinking in Tenpenny Tower's Federalist Lounge. He even has a reserved seat that he occupies while drinking in the lounge.[Non-canon 1]

Little is known about Hawthorne's background. During conversations with Herbert Dashwood, he reveals that Michael has been drinking since he was a toddler, and when told to be careful with his remaining brain cells, he says "Nah, drown the buggers!" [1] This excessive drinking at an early age may account for his current behavior.

Micheal Hawthorne wanders Tenpenny Tower but always returns to the Federalist Lounge for a drink. On Wednesday nights, he can be seen in bed with the local courtesan of the tower, Susan Lancaster.

Upon first meeting him, he will jovially ask the Lone Wanderer to share a drink with him, in which he will then begin discussing the ghoul business around the tower.

Michael Hawthorne appears only in Fallout 3. 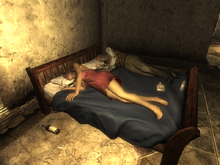