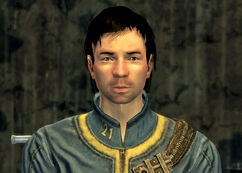 “I always wanted to see the Dinosaur and its Thermometer sign at Novac. Then, there's the famous Bison Steve sign. The McCarran Airfield and the Helios One power station signs are of much interest to my work - like the Sunset Sarsaparrilla Headquarter's bottle.”

Michael Angelo is the artistic pseudonym of Sheldon Weintraub, the neurotic, agoraphobic commercial artist originally from Vault 21. In 2281, he owns and operates a studio and manufacturing facility on the New Vegas Strip. He is also the brother of Sarah Weintraub, the proprietress of Vault 21.

Together with his sister, Sarah Weintraub, Michael grew up in Vault 21. After Mr. House opened the vault, Michael started to work as a designer of neon signs for the Strip's many establishments, often taking "special orders" from Mr. House himself.

Like his sister, living inside a vault all his life has made Michael an agoraphobic, which means that he is afraid of wide open spaces. Compared to his sister, Michael has the more severe form of agoraphobia, as he even has problems working on the main production floor of his workshop because of its size. Thus, he can usually be found in the workshop's back room, while his assistants, including Kate, work in the main hall.

When first encountered by the player, Michael is lacking inspiration. Talking to the player, with years of costly therapy being out of the question, he realizes that he might regain his inspiration by studying sights he hasn't seen so far.

Though he grew up in a vault, he doesn't have a Pip-Boy.

On the Collector's Edition card

Hard at work in his Vault 21 jumpsuit
Add an image to this gallery
Retrieved from "https://fallout.fandom.com/wiki/Michael_Angelo?oldid=3246015"
Community content is available under CC-BY-SA unless otherwise noted.