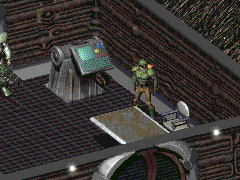 “I just run the supply room, checking equipment and other supplies out to people.”

Michael is a knight of the Brotherhood of Steel, stationed in Lost Hills in 2161.

Michael runs the supply room and has access to the Brotherhood's ordnance, armor, ammunition. Talus, Rhombus and John Maxson are the only people capable of giving authorization for equipment issuances.[1][2] He has a crush on Lara from downstairs, who is apparently always playing tricks on him.[citation needed] Kyle, the knight mechanic considers him a guy with bureaucratic forms instead of a brain.[3]

Fix the broken T-51b power armor: One way to get a nice, shiny set of power armor in the game is through Michael. That, or by fixing up the broken set that Kyle owns; ironically, it requires a small piece of machinery that Michael has for repairs, though Rhombus also has one in his quarters. He can also offer the Vault Dweller one complementary weapon and three sets of ammunition of their choice.

Michael appears only in Fallout.

Retrieved from "https://fallout.fandom.com/wiki/Michael_(Brotherhood)?oldid=3405056"
Community content is available under CC-BY-SA unless otherwise noted.