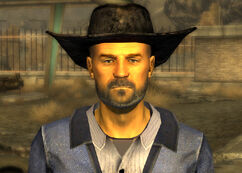 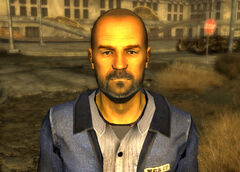 Meyers without the hat

Meyers is a former sheriff found in the NCR Correctional Facility in 2281. The Courier may rescue Meyers from the NCRCF which can result in Meyers becoming the new sheriff of Primm.

A lawman from a small town in the west, Meyers is a firm believer in justice, as long as it is his kind of justice. From time to time, he sped justice up, ignoring due process. Eventually, his practices caught up with him, he was charged with abuse of power, and sentenced to prison. Transferred to the NCRCF on a work-release program, Meyers considered it a fair trade. He is not sorry for what he did, but justice is justice even when he is on the wrong end.[1] By the time the Courier meets Meyers, his sentence is nearly finished.[2]

When Samuel Cooke started the prison break, Meyers hung back and avoided getting involved.[3] While he has a begrudging respect for Cooke,[4] he does not think much of the Powder Gangers, but he remains in the prison regardless and does not try and raise trouble because even he realizes when he is in no position to change things.[5] He believes that it is better for a convict like himself[6] to sit tight and wait for the NCR's return, rather than try to break out and end up with a bullet between the eyes.

My Kind of Town: The player character can recruit him to become the new sheriff of Primm, instead of commissioning the NCR to place it under military control or reprogramming Primm Slim.

A cut speech exists within the game's files, meant to be delivered by Meyers to a small group of inmates close to Meyers should the player character recruit him to be the Primm's new sheriff. In it, Meyers calls upon the other inmates to join him in forming a new police force in Primm, calling them "honorable and looking for redemption" despite not having "experience with law enforcement... at least not on the enforcement side."

Retrieved from "https://fallout.fandom.com/wiki/Meyers?oldid=3429432"
Community content is available under CC-BY-SA unless otherwise noted.