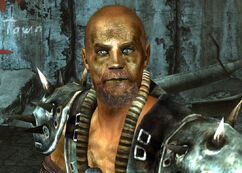 The Pitt Bridge, gate to The Pitt Downtown

“Boo hoo, the mean boss took all of the dumbass slave's goodies! Is 'im gonna cry to Ashur?!”

Mex is a Pitt raider guarding the gate to the Pitt around 2277.

Cruel and despicable, even for a Pitt Raider, Mex has been removed from general guard duties by Ashur and sent to guard the gates to Pitt Downtown after bouts of Pitt slave punishment that left many with horrific injuries. Adept with a rifle, Mex is content with tagging escapees, laying down a variety of mines, and watching his prey explode in a variety of impressive arterial spray patterns.[1]

Mex and three of his men keep their guns trained on the road into town all day, ready to blow away any pests or vermin trying to get in.

Mex appears only in The Pitt add-on for Fallout 3.

Mex is a reference to the chain of Mad Mex restaurants, which are relatively popular in Pittsburgh, and the surrounding area like in Monroeville and Squirrel Hill.

Retrieved from "https://fallout.fandom.com/wiki/Mex?oldid=3440079"
Community content is available under CC-BY-SA unless otherwise noted.