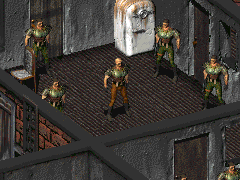 “I found out. Bad mistake. No one fucks with me. He's lucky to be alive.”

A horribly rude and gruff fellow, Metzger runs the Den's Slaver's Guild with an iron fist. He demands a lot of respect, but most of it is forced, as he is little more than a crude brute, controlling the Den through fear and intimidation. Rebecca, representing the more honest townsfolk, is not happy with the state of affairs, but is unable to move against him. She openly proposes a handsome reward for anyone who kills him.

Seeking more influence, he is investing in several projects he hopes will make a profit for him. He is mainly involved with trying to ascertain the production of jet. He is employing a local gang to guard the raw chemicals needed to produce jet, that he stores in an old church. He is apparently making money off acting as a middle man between Vault City and New Reno for the chemical shipments (both towns have no direct relations).

Vic, the Klamath antiques dealer, tried to swindle Metzger by selling him a broken radio to eavesdrop on transmissions between the Enclave and New Reno. Obviously, the slaver master did not take to this kindly and locked up the trader like a slave, forcing him to repair the radio or rot, whichever came first.

Eliminating Metzger will turn any slave-trading caravan hostile with the Chosen One.

Metzger appears only in Fallout 2.

Retrieved from "https://fallout.fandom.com/wiki/Metzger?oldid=2446452"
Community content is available under CC-BY-SA unless otherwise noted.