Metro cars are world objects in the Capital Wasteland.

Metro cars pulled behind engines were used in the metropolitan railway system of the region before the Great War. The cars were utilized to ferry individuals, and in some instances cargo, between various underground stations located around the Capital. Prior to the war, many citizens of Washington, D.C. would use the metro railway system to avoid motor vehicle traffic and travel around the city.

In the metro stations, and their trainyards.

Metro cars appear only in Fallout 3. 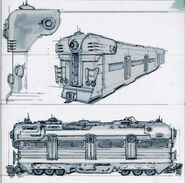 Close up of a metro Car