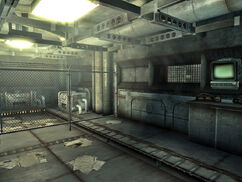 “You stay away from the generator room!”— Gustavo

Metro access & generator is a small access tunnel connecting Tenpenny Tower to the Metro system under the Capital Wasteland in 2277.

The area is comprised of two stairways and four separate rooms. Two of them (one connected to the metro tunnels, and the other connected to Tenpenny Tower's lobby) are separated by a locked door, which must be opened using the wall terminal on the third room in order to complete the Tenpenny Tower quest by helping Roy Phillips violently take over the tower. The third room is connected by a locked door (requiring a key) to the tower's outside yard, and has no actual connections to the other rooms apart from a small slit window. The fourth room is accessible by the Tenpenny Tower lobby and is used as a storage room. If finishing the Tenpenny Tower quest by peacefully brokering the ghouls' stay, the corpses of the previous human residents will be found here a few days later, along with a lone feral ghoul.

If the key to the backdoor behind the tower wasn't taken prior to allowing Roy Phillips into the tower peacefully, it will not be possible to open the containment door, since the key is needed. It is held by Gustavo, the guard, but when Roy Phillips becomes a resident, he kills everyone and the key disappears.

The storage room after the violent resolution
Add a photo to this gallery
Retrieved from "https://fallout.fandom.com/wiki/Metro_access_%26_generator?oldid=3413591"
Community content is available under CC-BY-SA unless otherwise noted.
... more about "Metro access & generator"
RDF feed
Has platform
PC +, Playstation 3 +  and Xbox 360 +