The Metro (now known as the D.C. Metro Ruins [citation needed]) is the pre-War rapid transit system of Washington, D.C. and neighboring communities in Maryland and Virginia. The metro was managed by the District of Columbia Transit Authority. The three components of this system are the cars, the stations, and the customers.

In 2277, tunnels can be used to move between the various settlements in the area, although many parts of the tunnels have been taken over by super mutants, raiders, feral ghouls, and radroaches.

Planning for the metro began in the 1950s as city planners envisioned a line that could rival existing systems in Boston, Philadelphia and even New York. Initially perceived as a threat to the highways, a subway proposal was finally approved during Kennedy's administration with construction beginning in 1969. The original system included stations across the District of Columbia but following the riots of 1968, city officials rerouted the mid-city line to encourage the rebuilding of areas that were burned out and destroyed. It wasn't until 2001, however, that all of the lines originally approved in 1968 were finally completed.

After being in operation for many years, the metro was modernized in the mid-21st century with the assistance of Vault-Tec and RobCo Industries. The subway tunnels were constructed of more durable material with improved lighting and safety features. Three new routes were added to the metro. These routes are the Blue Line, the Red Line, and the White Line. These lines were built upon existing stations, and new stations were built for expanding the network. The impetus for this expansion is the need for alternate transport in a city witnessing an increase in congestion and pollution from greater car ownership. Metro travel was free on Sundays.[1]

During and after the Great War of 2077, the Metro served as a place of shelter from the nuclear bombardment for many. Stations that were constructed farther away from the city itself, or were situated deeper underground, were less likely to be affected by explosive damage. This gave the assumption that it would serve as a safe home in the post-war years. However what many people either didn't think of or thought little about, was the invisible blanket of death caused by nuclear fallout. Radiation either killed or mutated these early survivors into ghouls.

By the time the Lone Wanderer visits the metro in 2277 however, they find that the stations are much less irradiated, attracting groups of non mutated humans to the well defensible shelters. These groups mostly consist of bandits or super mutants, who conduct hit-and-run attacks on caravans, traders, and individuals. Some groups however, such as the Family, have carved out meek lives in the dark subway, operating on power fed from underground power lines.

The metro is unlike many real-world subway systems. The use of an 'engine car' towing non-powered cars is very unusual, most real world versions were phased out as the size of engine motors decreased (An example of such an engine used on the London Underground still exists). Real subways tend to use multiple unit trains where two or more cars are permanently joined, and then assembled into longer trains. Each group of cars has a drivers' cab at each end, removing the need to detach the engine at the end of the line, turn it around and reconnect it to the front of the train for the return journey

Stations are identified on the surface level by directional signs and obelisks with the metro symbol. The main stations have a grander entrance, with four escalators leading down to the station entrance. Smaller stations have single concrete staircases that lead down to the entrance underneath a curved roof of glass panels, now broken. Double chain-link gates open connect the entrance to the station's lobby.

Generally, the stations share a similar configuration. They have a lobby where the customers once bought tickets from a metro employee ("agent") in a ticket booth. Restrooms and offices are located off the lobbies. Some lobbies have vending machines. In a few lobbies, there are status displays which show the power status of stations on the three primary lines in Washington, D.C. There is no display for the surrounding communities.

The Red Line was the first line completed. This line serves the central DC area and connects it with the northern and southern suburbs through its north-south orientation. The line serves from Friendship in the north to Anacostia Crossing in the south, and interchanges with the White Line at Metro Central. The line is shown on maps to extend further to the north and south suggesting links to Maryland and Virginia.

Trains on this line are serviced from Meresti trainyard in the north.

Like most of the network, the Red Line is not in a serviceable condition due to damage to stations, tunnels, tracks and rolling stock. However all stations appear to be receiving electricity according to control monitors.

The Blue Line consists of 9 known stations. It was the second line completed in the system.

The Blue Line serves the west of the greater DC area. The line is known to extend from Marigold in the south-west, to as far east as L'Enfant Plaza, and then north-west to North Potomac. The line is shown to extend beyond these points on DCTA maps, but it is not known if these were in passenger service, links to service depots, or were used for long distance services.

The Blue Line does not share any stations with either of the other metro lines; although the line appears to cross the White line near FDR Island station (on the blue line) and Foggy Bottom station (on the white line) on the system map, the lines are grade separated, meaning a service linking the lines would not be possible without further construction.

Trains on the Blue Line were serviced from Warrington trainyard, which also acted as the lines terminus in Virginia.

Like most DC metro lines, the Blue Line is currently not in a serviceable condition due to damage to stations, tunnels, tracks and rolling stock. However, large parts of the line can be traversed on foot, with the exception of irradiated parts of the line, such as near L'Enfant plaza and Warrington trainyard, and certain waterlogged sections.

Most stations still have access to electricity according to control monitors; additionally some stations retain their protectron security guards; however some stations have become home to groups of feral ghouls.

The White Line consists of 8 known stations and was the last line completed in the system.

This line extends from Takoma in the north east through the center of the city (meeting the Red Line at Metro Central) through to Platz in the west. Although the White and Blue Lines cross, this crossing is on different grades preventing any interchange of services or stations.

Like the other lines, the route map appears to extend into Maryland and Virginia.

It is not known where trains on this line were serviced.

Like most of the network, the white line is not in a serviceable condition due to damage to stations, tunnels, tracks and rolling stock. However all stations appear to be receiving electricity according to control monitors.

There are many stations in the Capital Wasteland whose connection to these three lines is not fully understood. This is due to the extensive damage that is visited upon these stations. These stations include the Fairfax Metro station and Bethesda underworks. Other stations had their entrances so completely destroyed that any attempt at locating them is impossible.

Protectrons are added to the metro in the modernization program. They are programmed for defending the metro from a variety of threats. These machines are usually located in a security office off the station lobby. The Lone Wanderer can activate the robot by hacking into a control terminal. Once the protectron is activated, it will head out to patrol the lobby and attack any target that does not have a valid metro ticket.

Fortunately, a ticket can normally be found by searching the desks in the offices. Or one can just blast the protectron after activating it and loot its energy cell.

The Pip-Boy world map usually indicates where the entrances to metro stations are with a circled-M logo. When one moves the pointer to one, it shows the name of the station. The problem is that the name it shows is often not the same as the name that appears if outside the subway and bringing up the Pip-Boy's local map for the area, nor the same as the name gotten for the exit to that station when bringing up the local map while inside the subway.

Because of all the interconnections between outside paths and inside subway stations, this name inconsistency adds an additional level of difficulty to getting around in an already difficult situation.

To add to the confusion, the distance scale inside a subway is often not the same as outside. For example, in the south-east area of the map, the distance looks pretty significant between the Seward Square station (near the Ranger compound) and the Anacostia Crossing (near Rivet City), but what looks like miles can be traversed in a flash simply by entering the station and walking no more than a couple of hundred feet across the subway platform.

To adjust for this difference, one gets an anomaly in that when they get to the Anacostia Crossing gate after leaving Seward Square, the world map will show that they are still on the edge of Seward Square, but after exiting the gate, it will show them all the way down at the station by Rivet City.

This effect is not limited to subways. At the back door of the GNR building, one gets a different positioning before and after going through the door.

“The only way to reach the Super Mutant-occupied D.C. ruins is by traveling underground, usually through the abandoned Metro tunnels.”— Fallout 3 loading screen

While it may appear to be impossible to get very far in the subway tunnels because of all the debris, the fact is that one can get to a remarkable number of locations without ever having to come above ground, and even more when adding in places where one can make short, safe walks above ground from one station's exit to another station's entrance. Note that with just a couple of short above-ground walks, someone can get all the way from Farragut West (just across the river from Super-Duper Mart) to Rivet City (near the bottom of the map) and many important places along the way.

On Sundays, all passengers were allowed to ride for free.[2][3]

The DC metro appears only in Fallout 3. 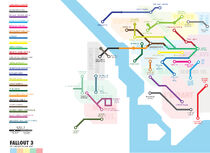 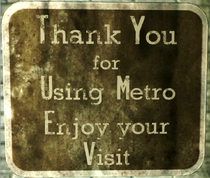 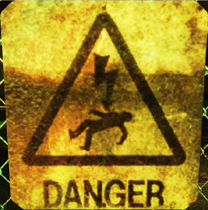 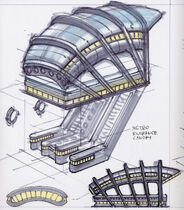 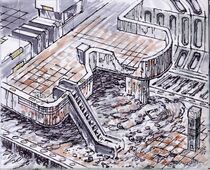 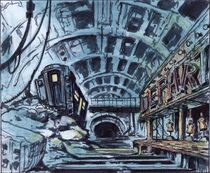 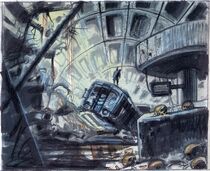 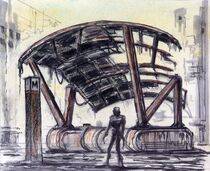 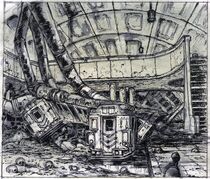 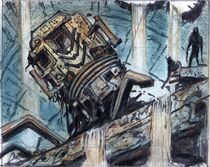 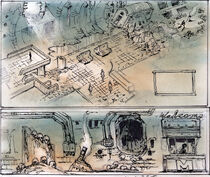 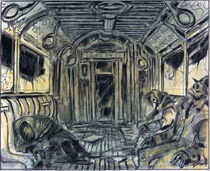 The Art of Fallout 3
Add an image to this gallery

Retrieved from "https://fallout.fandom.com/wiki/Metro?oldid=2889587"
Community content is available under CC-BY-SA unless otherwise noted.