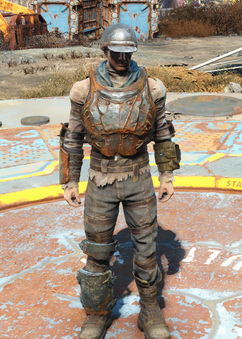 Metal armor and metal helmet are a multi-piece set of armor in Fallout 4.

Metal armor consists of six separate pieces - the chest, two arms, two legs as well as a matching helmet. Like with all other armor pieces, each can be worn over clothing to combine the stat bonuses, however, certain outfits may occupy some or all of the armor slots - for instance, the red dress occupies legs and torso slots.

Similar to other armor sets, metal armor changes appearance with mods; for instance, polished metal armor will appear shiny and reflective. There are three variants of metal armor: standard, sturdy and heavy.

Given that metal armor lives up to its name by being assembled from various crudely fashioned pieces of scrap metal. It is also the heaviest of the three base armor sets.

Metal armor offers the best Damage Resistance at the cost of inferior Energy Resistance and Radiation Resistance. It is part of a family of specialized armor sets, with the other two members being leather armor - which focuses on mitigating energy damage over ballistic damage and combat armor which offers the most balanced protection from ballistic and energy damage in the Commonwealth.

The metal helmet provides a Damage Resistance of 9 as well as an Energy Resistance of 4. It appears as a simple metal helmet with no inside lining and an adjustable leather strap around the brim. It may be modified to improve its protection provided but lacks optional slots for things such as pockets or lighter build.

In the Contraptions Workshop add-on, metal armor can be crafted with the armor forge. The quality of the armor is chosen before production but the part generated is random.

Although the heavy metal right arm has a blade mounted on it, it is there for visual purposes only and cannot be used. 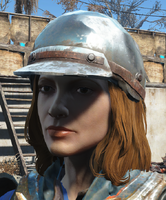 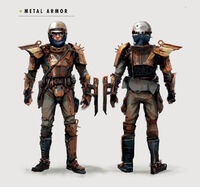