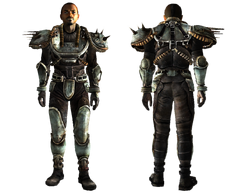 The metal armor and matching metal helmet is a piece of armor in Fallout 3.

A craft metal armor created from a variety of scrap pieces put on a black leather armor. The metal helmet is similar in shape to a motorcycle helmet, though with a dirty silver color instead of white, as well as no neck wrap or goggles for males, and for females, the helmet is made of rusted metal and is open faced, similar in shape to combat helmets (although it still muffles the user's voice while worn). The shoulder plates have metal spikes welded onto them.

Metal armor serves as a very heavy armor, second only to Ranger battle armor for non-powered armors, although at the cost of 1 Agility. It is fairly rare, and so, is usually used as a mid game item, after combat armor and before obtaining Power Armor Training, but should be avoided by players who rely heavily on agility (such as stealth based characters and snipers).

Metal armor concept art by Adam Adamowicz
Add an image to this gallery
Retrieved from "https://fallout.fandom.com/wiki/Metal_armor_(Fallout_3)?oldid=2907886"
Community content is available under CC-BY-SA unless otherwise noted.