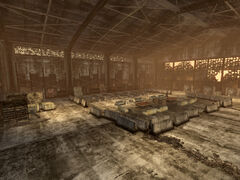 The mess hall & munitions storage is a location within Nellis Air Force Base in the Mojave Wasteland in 2281. It is located in the northern section of the base, next to the Nellis hangars.

Inside the mess hall is the Boomer munitions manager's store at the northwest end of the hallway. Here various explosive weapons such as mines and missile launchers can be found inside the store.

Near the west entrance is a doorway to a kitchen with some Boomer chefs inside. In the middle of the hall are tables and chairs, as well as several Boomers eating. A couple of VR pods, used as flight simulators, can be found in the southern part of the mess hall.

The munitions storage part of the building is based on the real world facility within the Nellis Air Force Base, known as the Nellis AFB Weapons Storage Area. Similarly to the in-game location, it is located on the northeast side of the base.[1] 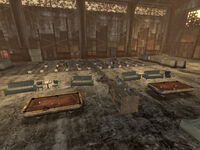 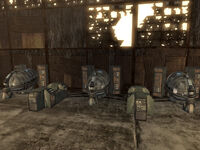 Notice the images from Tranquility Lane

Mini nuke in the armory
Add a photo to this gallery

Retrieved from "https://fallout.fandom.com/wiki/Mess_hall_%26_munitions_storage?oldid=3353498"
Community content is available under CC-BY-SA unless otherwise noted.