You Gotta Break Out a Few Eggs 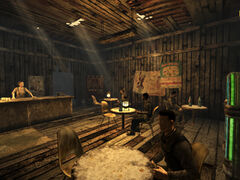 “Let me ask you a question - what's the tastiest thing you've ever eaten?”— Jas Wilkins

The mess hall is a building within the mining settlement of Sloan in the Mojave Wasteland in 2281, serving as the diner for Sloan's quarry workers.

Within the building, there are a few tables, a jukebox, and a Sunset Sarsaparilla vending machine. Jas Wilkins stands behind a counter, in front of the doorway to the kitchen. Inside of the kitchen is a fridge, shelves, and a counter with some meat on it.

On the counter behind Jas, there are a few strange meat pies. This would suggest that some of the meat she serves is actually human meat.

The mess hall appears only in Fallout: New Vegas.