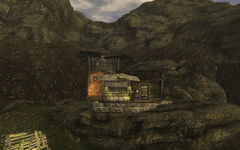 The area has been charred by the bombs from the Great War and the pools of water are irradiated, thus the Mesquite Mountains crater naturally attracts ghouls. At any given time, there are several feral ghouls, feral ghoul roamers, or feral ghoul reavers roaming the area. A bit to the east, there is an improvised shelter with a bed and a first aid box.

The motel is a two-story shack containing the late Doctor Rotson's lab, a kitchen on the first floor, and his sleeping quarters on the second floor. The motel itself has two feral ghoul reavers outside which are not level-dependent.

Despite the widespread radiation outside near the irradiated lake and on the motel's porch, Hell's Motel is radiation-free inside. Upon entering, the body of Dr. Rotson will be found lying in a pool of blood, along with a crazed Mister Handy. It appears as though Rotson was making moonshine. The device in the rear right corner of the kitchen appears to be a still, with a moonshine bottle laying in front of it.

The Mesquite Mountains crater appears only in Fallout: New Vegas.

Mesquite Mountains crater is similar in appearance and geographical location to the real world Colosseum Mine in Clark County, Nevada.

Improvised shelter found to the east

Doctor Rotson found in a pool of blood

Mister Handy in the motel

Moonshine installation
Add an image to this gallery
Retrieved from "https://fallout.fandom.com/wiki/Mesquite_Mountains_crater?oldid=3179433"
Community content is available under CC-BY-SA unless otherwise noted.