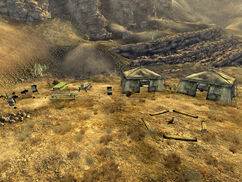 We Will All Go Together

There are two tents each containing two beds at the upper site. There are abandoned vehicles to the east of the camp. When the Courier arrives, giant radscorpions have taken over the main campsite and radscorpions of various sizes inhabit the area surrounding the camp. The radscorpions will re-spawn.

Up the significantly steep hill to the southwest of the location, there are 3 graves containing various items. A shovel is required to loot the graves. This location can be used for player character housing, as there are amenities including prickly pear fruit, barrel cactus fruit and banana yucca fruit nearby, as well as a campfire and beds.

This is the location that Private Edwards will go to if the Courier tells him that there are many places to go during the quest We Will All Go Together. He will often be killed by the three giant radscorpions that are in the area.

The Mesquite Mountains camp site is based on the real world location of Mesquite Wilderness Area in San Bernardino County, California.

The three graves southwest of the camping site

Wasteland Survival Guide
Add a photo to this gallery
Retrieved from "https://fallout.fandom.com/wiki/Mesquite_Mountains_camp_site?oldid=3311189"
Community content is available under CC-BY-SA unless otherwise noted.