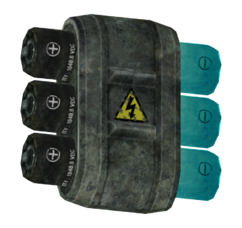 The Mesmetron power cell is a type of ammunition found in Fallout 3.

The Mesmetron power cell, as the name suggests, is used only by the Mesmetron. It is virtually the same in appearance as energy cells, but the negative terminals are capped with blue coloring instead of yellow.

This ammunition can also be obtained in Fallout: New Vegas through console commands, although it serves no purpose as the Mesmetron does not exist within the game files.

Retrieved from "https://fallout.fandom.com/wiki/Mesmetron_power_cell?oldid=3442759"
Community content is available under CC-BY-SA unless otherwise noted.