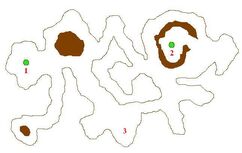 A short series of caves which runs underneath the Mesa Verde canyon. They were once home to a rather hefty population of molerats, which were decimated by the Vipers' pet two-headed rattlesnakes. The player can use these caves to bypass the Viper blockade.

Retrieved from "https://fallout.fandom.com/wiki/Mesa_Verde_Caves?oldid=2871317"
Community content is available under CC-BY-SA unless otherwise noted.