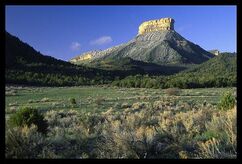 Hidden away in the shadows of a large cliff, near the top of a mesa rising from the desert floor, is the village of Mesa Verde. It is the home of the Ciphers, also known as the Painted People, due to their extensive use of body paint. They're one of the smallest tribes in the area, but their hard-to-reach village on the mesa enables them to hold out against superior numbers of aggressors.

The Ciphers are unusual tribals because they're skilled in mathematics and electronics, as illustrated by the extensive schematics on the walls of their village. They don't realize it, but they have the schematic for a chip necessary to release the remaining rocket at Bloomfield from its docking clamps. If the clamps aren't released, the rocket goes nowhere and will most likely explode on the launchpad.

In the weeks following the Great War, a group of scientists and soldiers based at the atomic laboratory at Los Alamos, New Mexico, wandered north with a band of other survivors, searching for a place of relative safety. They assumed that they were the only "civilized" people left, since everyone else they encountered attacked them, trying to take their food, water, and clothes. When they discovered one of the ancient pueblos at Mesa Verde, they decided to set up camp there.

The group carried only a limited amount of technology with them. The soldiers had pistols and rifles, and the scientists carried one barely working computer, enough parts to build several water makers and a crude wind turbine to power them, several lead-lined boxes containing enriched uranium, and a small supply of medicine. The rest of the band had a variety of miscellaneous gear which most contributed to group use.

A decade later, the computer began to fail. Fearing that the technology of the Old World would be forever lost, the scientists began painting and carving electronic schematics into the walls of the pit (called a kiva by the builders of the pueblo). At the same time, they insisted that mathematics be emphasized when educating the village children so that their descendants would understand how to use the schematics. Because they were steeped in math from a very early age, the villagers tend to use a lot of math terms to express themselves. This occasionally confusing, cryptic way of speaking caused them to be dubbed "Ciphers" by educated wasteland dwellers who thought they might be speaking in some type of code. The Ciphers merely shrugged and accepted the name.

As the years passed, the Ciphers forgot their disciplined, scientific roots and became more concerned with everyday survival rather than scientific theories. When it comes to electronic devices and weapons, the Ciphers know more about how to use it than how it works: "The symbols say put this and this together, and then this happens. Why? Who knows? As long as the numbers are right, who cares?"

The emphasis on mathematics in their culture has led to Ciphers to assign an almost mystical significance to specific numbers. It's the closest thing to a religion they have. Each Cipher is believed to have a personal number, determined by the Nemonik at their birth. Ciphers will take their personal number into consideration when doing almost anything, from heading out to hunt on the sixth day of the month to choosing whom to marry. It's all very confusing to outsiders.

The village at Mesa Verde was tiny to begin with, having barely enough room to house all the scientists, soldiers, and other survivors. Nearly a century later, the descendants of the original settlers had outgrown the space and resources available. Many families chose to adopt a nomadic lifestyle to avoid perpetual thirst and hunger. Only those families with very young children or those Ciphers too old and feeble to travel remain full-time in the village.

Both Cipher men and women are capable fighters, and even the children are taught how to fight as soon as they're able as a matter of practicality. A typical Cipher nomad band consists of two to three families traveling together. They usually have at least one type of electronic device like a cattle prod or an ultrasonic generator to ward off wild animals.

At the top of the mesa, the Ciphers have an array of water makers that condense moisture from the air and produce drinkable water. They have a wind turbine that generates a small amount of electricity, enough to power the water makers. However, it's not a very quick operation, and barely enough water is produced each day to serve the village's needs.

A small adobe pueblo built along the underside of an overhanging cliff. A chasm splits the village into three sections, requiring the Ciphers to use rope suspension bridges to span the gap. The two most apparent features of the village are a large covered pit near the village entrance and a partially complete laser cannon aimed at the Viper camp down on the canyon floor.

A small abode pueblo built along the underside of an overhanging cliff. A chasm splits the village in two, requiring the Ciphers to use rope suspension bridges to span the gap. The two most apparent features of the village are a large covered pit near the village entrance and a partially complete laser cannon aimed at the Viper camp down on the canyon floor.

Rocky canyons surrounding the base of the mesa. At a junction of several canyons, including the one which leads to the village, is a Viper encampment. They stop anyone who's trying to go to or come from the Cipher village.

These short series of caves run underneath the Mesa Verde canyon. They were once home to a rather hefty population of molerats, but that population has since been decimated by the Vipers' pet two-headed rattlesnakes. The player character can use these caves to bypass the Viper blockade, but they will probably have to deal with the snakes.

Mesa Verde did not appear in any of the published games but was to appear in Van Buren, the canceled Fallout 3 project by Black Isle Studios.

Retrieved from "https://fallout.fandom.com/wiki/Mesa_Verde?oldid=3335828"
Community content is available under CC-BY-SA unless otherwise noted.