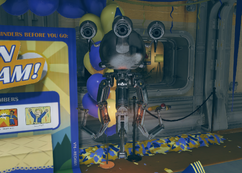 Merriman is one of the many Mister Handies that serve Vault 76. It mans station #4 (Join a Team), where it facilitates the distribution of party hats to residents exiting the vault.

By 2103, Merriman sarcastically remarks on the straggler Vault 76 residents who finally decide to wake up and leave the vault after being in there a whole year since Reclamation Day.

Merriman appears only in Fallout 76.

Retrieved from "https://fallout.fandom.com/wiki/Merriman?oldid=3279267"
Community content is available under CC-BY-SA unless otherwise noted.